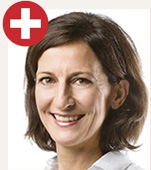 Irena Sailer received her dental education and Dr. med. dent. degree from the Faculty of Medicine, University of T?bingen, Germany in 1997/ 1998. In 2003 Dr. Sailer received an Assistant Professorship at the Clinic of Fixed and Removable Prosthodontics and Dental Material Sciences in Zurich. From 2010 on she was an Associate Professor at the same clinic. In 2007 Dr. Sailer was a Visiting Scholar at the Department of Biomaterials and Biomimetics, Dental College, New York University, USA. Additionally, since 2009 she holds an Adjunct Associate Professorship at the Department of Preventive and Restorative Sciences, Robert Schattner Center, School of Dental Medicine, University of Pennsylvania. Philadelphia, USA.
Since September 2013 she is the Head of the Division of Fixed Prosthodontics and Biomaterials at the University of Geneva. Irena Sailer is a Specialist for Prosthodontics (Swiss Society for Reconstructive Dentistry), and holds a specialization degree for Dental Implantology (WBA) of the Swiss Society for Dentistry. She is a Member of the Board of the Swiss Society of Reconstructive Dentistry and of the Swiss Leadership Team of the ITI (International Team for Implantology). Furthermore, Irena Sailer serves the Scientific Boards of the European Association of Osseointegration and the Swiss Society of Implantology.
Irena Sailer is currently a Board Member of the EAO, an Active Member of the European Academy of Esthetic Dentistry and an Active Fellow of the Greater New York Academy of Prosthodontics.