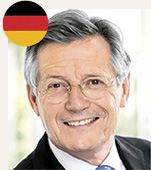 Prof. Dr. J. R. Strub received his D.D.S., Dr. Med. Dent. and Dr. Med. Dent. Habil. (PhD equiv) degrees from the University of Zurich, Switzerland in 1975/1985 and the Dr. h.c. from the National and Kapodistrian University, Athens, Greece, in 2008.
He was a Visiting Assistant Professor of Biomaterials at Tulane University and Louisiana State University, New Orleans, USA, 1982-1983. From 1982-1988 he was Associate Professor and co-director of the Graduate Programme in Periodontal Prosthetics at the University of Zurich.
From 1988- 2016 he was Professor and Chair of the Department of Prosthodontics at the Albert-Ludwigs University in Freiburg, Germany.
Since October 2016 Prof. Dr. J. R. Strub is Professor Emeritus (Albert-Ludwigs-University in Freiburg, Germany).
He is part-time in private practice and works as consultant for companies.