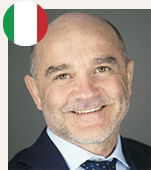 ・Graduated in 1988 from the university of Bologna, Italy with a degree in dentistry.
・He was awarded PhD in Medical Biotechnology in 1999 from the University of Bologna, Italy:
・Professor of periodontology at the University of Bologna, Italy from 2000
・Received many awards for clinical research in periodontology in Europe and the United States.
In 2006 and 2008 is the winner of The AAP
Foundation-E Bud Tarrson Reasearch Award in Oral Plastic Surgery
・Active member of EAED (European Academy of Esthetic Dentistry),SIdP (Italian Society of Periodontology) and SIO (Italian Society of Osteointegration); member of the European Federation of Periodontology
・Associate Editor of the International Journal of Esthetic Dentistry and Member of the editorial board the International Journal of Periodontics and Restorative Dentistry.
・Peer reviewer in most ranked Periodontal Journals
・Author of 100 pubblications in Pubmed
・Innovator of several soft tissue plastic surgical techniques
・Speaker at major international conferences on periodontology
・Has taught theoretical and practical (with live Surgery) courses in all countries.
・Co-author of two illustrated textbooks on periodontal plastic surgery (Ed. Martina)
・Co-author of chapter “Mucogingival Therapy-Periodontal Plastic Surgery” in Clinical Periodontology and Implant Dentistry (Lindhe J, Lang NP, Karring T [eds], Wiley-Blackwel
・Author of the book title, ‘Mucogingival Esthetic Surgery’ from Quintessence Publishing, published in 12 languages